We have taken in several horses and ponies over the years who have suffered a terrible existence in confinement – often solitary.

It is then so heart-warming to see them recover fully and go on to enjoy the freedom they deserve.

Ninja is quite a character – a proper Victor Meldrew who likes plenty of personal space. He is known for making a scene if he takes a dislike to horses in close proximity and can become very vocal and confrontational indeed. This has got him into trouble ……but that’s a story for another time!

Like most ex-stallion Shetlands, Ninja firmly believes he is gorgeous and fancies himself with the ladies – strutting around tossing his mane in a wild manner.

Please sponsor Ninja – by doing so you allow us to continue to be ready and able to respond, offering a bright and secure future to ponies who have suffered a bad start in life.

A call came in from one of our supporters, who had been contacted by a family member working for a power company.

The relative had spotted some ponies in a shed and was concerned for their welfare.

A description of the conditions raised alarm bells with us and we contacted one of the RSPCA Inspectors we work with regularly and asked them to take a look.

Five ponies were found in total; all barricaded into stables. The ponies had received hay, (thrown over the door) and water intermittently.

However, imprisoned in these boxes, their bodies and feet had become caked in layers of manure and soaked in urine. They had clearly not been out of the stables for at least a year and the rotting muck was three feet deep in places. Their hooves were badly over-grown and decaying from the ammonia in the filthy bedding.

As soon as Ninja was released and led from the barn he threw himself onto the gravel yard and rolled and rolled. His delight at his new found freedom was clear for all to see.

Ninja was a stallion and had been stabled alone. He was thankfully in good body condition under the filth, but it took at least three baths to get his coat and skin completely clean as the muck was stuck like glue.

His feet were a bigger problem, with very little of his frogs (an important part of the weight bearing surface of a horses foot), remaining.

One twisted and curled front hoof in particular was causing him pain and making him lame.

A year down the line, with careful rehabilitation work from our skilled Farrier, his distorted foot is almost as good as it can be and he is sound.

Ninja has attitude to burn and is an unlikely child’s pony any time soon – we had therefore felt for some time that his future lay with Here4Horses and arrangements were duly made with the RSPCA, to sign him over to us.

Picking a fight with horses or ponies he decides are ‘the enemy’ (which is most of the one’s he comes across… except his grooming partner Amazon!).

Waiting – his patience is extremely limited. 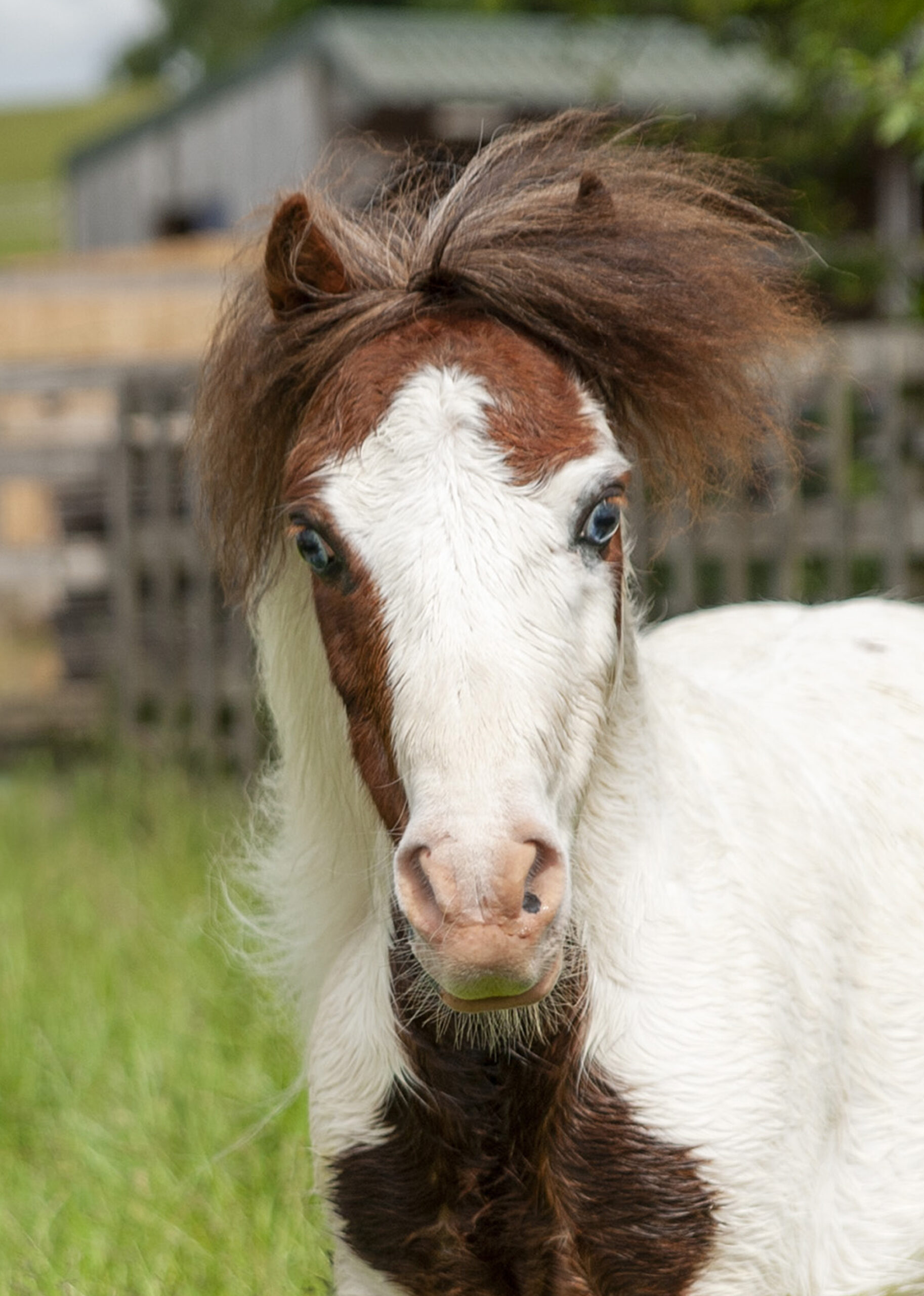 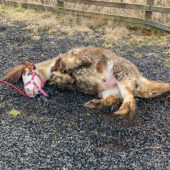 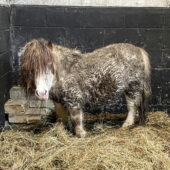 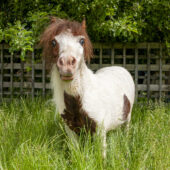 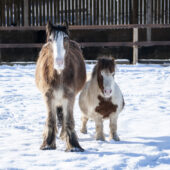 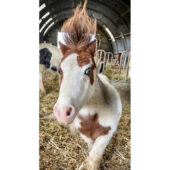 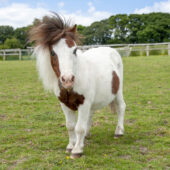 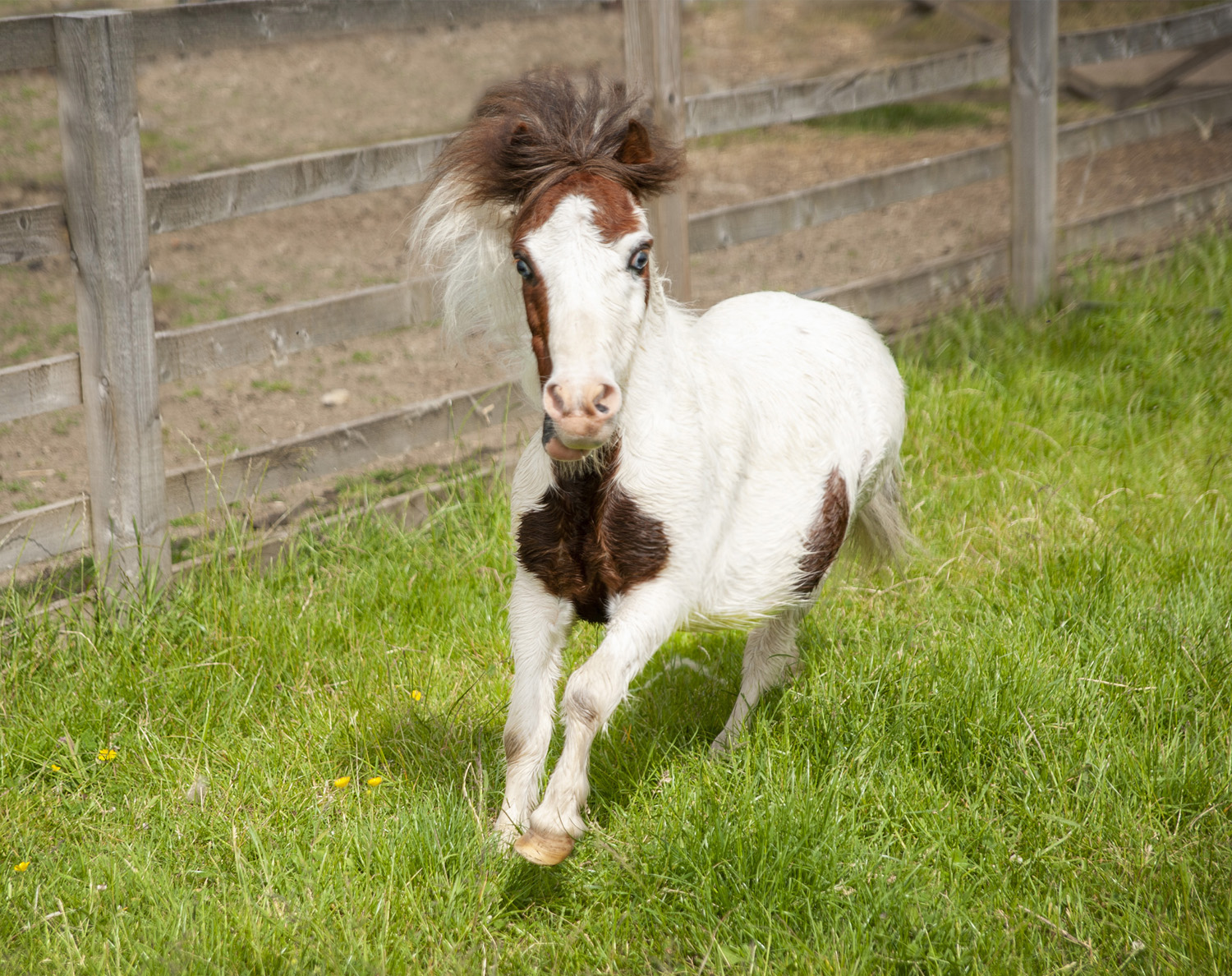 A cheeky faced character, carrying rather too much weight, bounced down the ramp of the transporter.